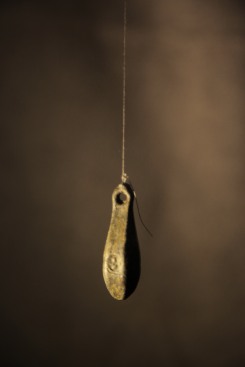 Curiosity about a strange heirloom – an ancient fishing sinker he inherited from his Spanish immigrant grandfather – is what drives the fictional narrator of this documentary to travel from his New York home to Tampa, Florida. And before long, thanks to the amazing cast of Tampa old-timers he encounters there, the narrator –and the spectator– will be immersed in the sights, sounds, textures, tastes and smells of a world on the verge of disappearing.

It is the world built by Spanish immigrants, who arrived to Tampa by the thousands in the late nineteenth and early twentieth centuries, and who, alongside other immigrants from places like Cuba, Sicily, Germany, and Romania, helped transform a once sleepy fishing village into the bustling “Cigar Capital of the World.”

The narrator’s grandfather had emigrated from Spain to Cuba and from Cuba to Tampa, before finally settling and starting a family in New York. For decades, the fishing weight occupied a place of honor, first atop the family radio, then on the family television. And even though everyone in the family knew that the sinker was some kind of relic from abuelo’s years in Tampa, nobody ever thought of asking him about its significance. And now it is too late.

The Weight of Remembering is a co-production of Whitestoneridge Productions and the Centro Español de Tampa.